An XFEM/CZM implementation for massively parallel simulations of composites fracture 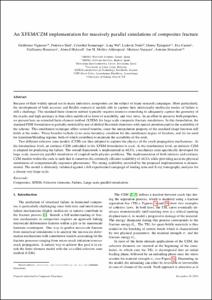 Jérusalem, Antoine
Document typeArticle
PublisherElsevier
Rights accessOpen Access
ProjectMATERA+ - ERA-NET Plus on Materials Research (EC-FP7-235303)
Abstract
Because of their widely generalized use in many industries, composites are the subject of many research campaigns. More particularly, the development of both accurate and flexible numerical models able to capture their intrinsically multiscale modes of failure is still a challenge. The standard finite element method typically requires intensive remeshing to adequately capture the geometry of the cracks and high accuracy is thus often sacrificed in favor of scalability, and vice versa. In an effort to preserve both properties, we present here an extended finite element method (XFEM) for large scale composite fracture simulations. In this formulation, the standard FEM formulation is partially enriched by use of shifted Heaviside functions with special attention paid to the scalability of the scheme. This enrichment technique offers several benefits since the interpolation property of the standard shape function still holds at the nodes. Those benefits include (i) no extra boundary condition for the enrichment degree of freedom, and (ii) no need for transition/blending regions; both of which contribute to maintaining the scalability of the code. Two different cohesive zone models (CZM) are then adopted to capture the physics of the crack propagation mechanisms. At the intralaminar level, an extrinsic CZM embedded in the XFEM formulation is used. At the interlaminar level, an intrinsic CZM is adopted for predicting the failure. The overall framework is implemented in ALYA, a mechanics code specifically developed for large scale, massively parallel simulations of coupled multi-physics problems. The implementation of both intrinsic and extrinsic CZM models within the code is such that it conserves the extremely efficient scalability of ALYA while providing accurate physical simulations of computationally expensive phenomena. The strong scalability provided by the proposed implementation is demonstrated. The model is ultimately validated against a full experimental campaign of loading tests and X-ray tomography analyzes.
CitationVigueras, Guillermo [et al.]. An XFEM/CZM implementation for massively parallel simulations of composites fracture. "Composite Structures", Juliol 2015, vol. 125, p. 542-557.
URIhttp://hdl.handle.net/2117/84770
DOI10.1016/j.compstruct.2015.01.053
ISSN0263-8223
Publisher versionhttp://www.sciencedirect.com/science/article/pii/S0263822315001063
Collections
Share: