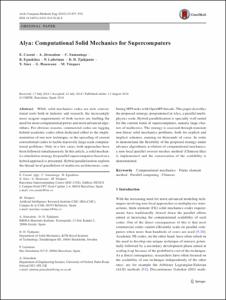 While solid mechanics codes are now conventional tools both in industry and research, the increasingly more exigent requirements of both sectors are fuelling the need for more computational power and more advanced algorithms. For obvious reasons, commercial codes are lagging behind academic codes often dedicated either to the implementation of one new technique, or the upscaling of current conventional codes to tackle massively large scale computational problems. Only in a few cases, both approaches have been followed simultaneously. In this article, a solid mechanics simulation strategy for parallel supercomputers based on a hybrid approach is presented. Hybrid parallelization exploits the thread-level parallelism of multicore architectures, combining MPI tasks with OpenMP threads. This paper describes the proposed strategy, programmed in Alya, a parallel multi-physics code. Hybrid parallelization is specially well suited for the current trend of supercomputers, namely large clusters of multicores. The strategy is assessed through transient non-linear solid mechanics problems, both for explicit and implicit schemes, running on thousands of cores. In order to demonstrate the flexibility of the proposed strategy under advance algorithmic evolution of computational mechanics, a non-local parallel overset meshes method (Chimera-like) is implemented and the conservation of the scalability is demonstrated.
CitationCasoni, Eva [et al.]. Alya: Computational Solid Mechanics for Supercomputers. "Archives of Computational Methods in Engineering", 13 Agost 2014, vol. 22, núm. 4, p. 557-576.
URIhttp://hdl.handle.net/2117/84764
DOI10.1007/s11831-014-9126-8
ISSN1134-3060
Publisher versionhttp://link.springer.com/article/10.1007%2Fs11831-014-9126-8#/page-1