Impact of Vacancies on Diffusive and Pseudodiffusive Electronic Transport in Graphene 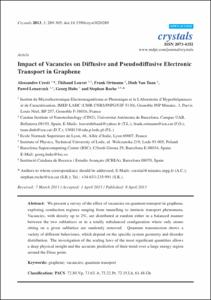 We present a survey of the effect of vacancies on quantum transport in graphene, exploring conduction regimes ranging from tunnelling to intrinsic transport phenomena. Vacancies, with density up to 2%, are distributed at random either in a balanced manner between the two sublattices or in a totally unbalanced configuration where only atoms sitting on a given sublattice are randomly removed. Quantum transmission shows a variety of different behaviours, which depend on the specific system geometry and disorder distribution. The investigation of the scaling laws of the most significant quantities allows a deep physical insight and the accurate prediction of their trend over a large energy region around the Dirac point.
CitationCresti, Alessandro [et al.]. Impact of Vacancies on Diffusive and Pseudodiffusive Electronic Transport in Graphene. "Crystals", 08 Abril 2013, vol. 3, núm. 2, p. 289-305.
URIhttp://hdl.handle.net/2117/84763
DOI10.3390/cryst3020289
ISSN2073-4352
Publisher versionhttp://www.mdpi.com/2073-4352/3/2/289