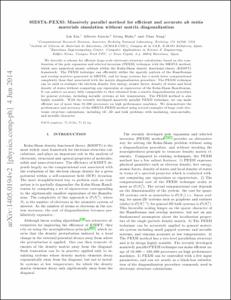 We describe a scheme for efficient large-scale electronic-structure calculations based on the combination of the pole expansion and selected inversion (PEXSI) technique with the SIESTA method, which uses numerical atomic orbitals within the Kohn–Sham density functional theory (KSDFT) framework. The PEXSI technique can efficiently utilize the sparsity pattern of the Hamiltonian and overlap matrices generated in SIESTA, and for large systems it has a much lower computational complexity than that associated with the matrix diagonalization procedure. The PEXSI technique can be used to evaluate the electron density, free energy, atomic forces, density of states and local density of states without computing any eigenvalue or eigenvector of the Kohn–Sham Hamiltonian. It can achieve accuracy fully comparable to that obtained from a matrix diagonalization procedure for general systems, including metallic systems at low temperature. The PEXSI method is also highly scalable. With the recently developed massively parallel PEXSI technique, we can make efficient use of more than 10 000 processors on high performance machines. We demonstrate the performance and accuracy of the SIESTA-PEXSI method using several examples of large scale electronic structure calculations, including 1D, 2D and bulk problems with insulating, semi-metallic, and metallic character.
CitationLin, Lin [et al.]. SIESTA-PEXSI: Massively parallel method for efficient and accurate ab initio materials simulation. "Journal of Physics: Condensed Matter", 10 Juny 2014, vol. 26, núm. 30.
URIhttp://hdl.handle.net/2117/84762
DOI10.1088/0953-8984/26/30/305503
ISSN0953-8984
Publisher versionhttp://iopscience.iop.org/article/10.1088/0953-8984/26/30/305503/meta;jsessionid=DFE5A7A4A08175AA2833DC4C5347E25E.c1.iopscience.cld.iop.org