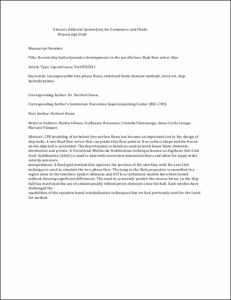 Document typeArticle
PublisherElsevier
Rights accessOpen Access
Abstract
CFD modeling of turbulent free surface flows has become an important tool in the design of ship hulls. A two-fluid flow solver that can predict the flow pattern, free surface shape and the forces on the ship hull is presented. The discretization is based on unstructured linear finite elements, tetrahedras and prisms. A Variational Multiscale Stabilization technique known as Algebraic Sub Grid Scale Stabilization (ASGS) is used to deal with convection dominated flows and allow for equal order velocity–pressure interpolations. A fixed grid method that captures the position of the interface with the Level Set technique is used to simulate the two-phase flow. The jump in the fluid properties is smoothed in a region close to the interface. Spalart Allmaras and SST k–ω turbulence models have been tested without showing significant differences. The need to accurately predict the viscous forces on the ship hull has motivated the use of anisotropically refined prism elements close the hull. Such meshes have challenged the capabilities of the equation based reinitialization techniques that we had previously used for the Level Set method.
CitationOwen, Herbert [et al.]. Recent ship hydrodynamics developments in the parallel two-fluid flow solver Alya. "Computers & Fluids", 10 Juliol 2013, vol. 80, p. 168-177.
URIhttp://hdl.handle.net/2117/84759
DOI10.1016/j.compfluid.2012.03.022
ISSN0045-7930
Publisher versionhttp://www.sciencedirect.com/science/article/pii/S0045793012001193
Collections
Share: