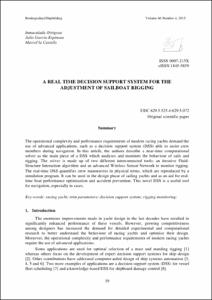 Except where otherwise noted, content on this work is licensed under a Creative Commons license : Attribution-NonCommercial-NoDerivs 3.0 Spain
Abstract
The operational complexity and performance requirements of modern racing yachts demand the use of advanced applications, such as a decision support system (DSS) able to assist crew members during navigation. In this article, the authors describe a near-time computational solver as the main piece of a DSS which analyses and monitors the behaviour of sails and rigging. The solver is made up of two different interconnected tools: an iterative Fluid-Structure Interaction algorithm and an advanced Wireless Sensor Network to monitor rigging. The real-time DSS quantifies crew manoeuvres in physical terms, which are reproduced by a simulation program. It can be used in the design phase of sailing yachts and as an aid for real-time boat performance optimisation and accident prevention. This novel DSS is a useful tool for navigation, especially in races.
CitationOrtigosa, I., Garcia, J., Castells, M. A real time decision support system for the adjustment of sailboat rigging. "Brodogradnja", 2015, vol. 66, núm. 4, p. 39-56.
URIhttp://hdl.handle.net/2117/84749
ISSN0007-215X
Publisher versionhttps://www.fsb.unizg.hr/brodogradnja/
Collections
Share: