Spherical wind sensor for the atmosphere of mars 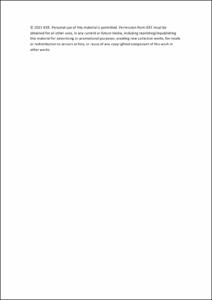 Document typeArticle
Rights accessOpen Access
Abstract
A novel wind speed and direction sensor designed for the atmosphere of Mars is described. It is based on a spherical shell divided into four triangular sectors according to the central projection of tetrahedron onto the surface of the unit sphere. Each sector is individually controlled to be heated above the ambient temperature independently of the wind velocity and incidence angle. A convection heat rate model of four hot spherical triangles under forced wind has been built with finite element method thermal-fluidic simulations. The angular sensitivity of the tetrahedral sphere structure has been theoretically determined and compared with the tessellation of the sphere by four biangles. A 9-mm-diameter prototype has been assembled using 3-D printing of the spherical shell housing in the interior commercial platinum resistors connected to an extension of a custom design printed board. Measurements in Martianlike atmosphere demonstrate sensor responsiveness to the flow in the velocity range 1–13 m/s at 10-mBar CO2 pressure. Numerical modelization of the sensor behavior allows to devise an inverse algorithm to retrieve the wind direction data from the raw measurements of the power delivered to each spherical sector. The functionality of the inverse algorithm is also demonstrated.
CitationKowalski, L., Atienza, M., Gorreta, S., Jimenez, V., Dominguez, M., Silvestre, S., Castañer, L. Spherical wind sensor for the atmosphere of mars. "IEEE sensors journal", 01 Abril 2016, vol. 16, núm. 7, p. 1887-1897.
URIhttp://hdl.handle.net/2117/84737
DOI10.1109/JSEN.2015.2509168
ISSN1530-437X
Publisher versionhttp://ieeexplore.ieee.org/stamp/stamp.jsp?tp=&arnumber=7358056
Collections
Share: