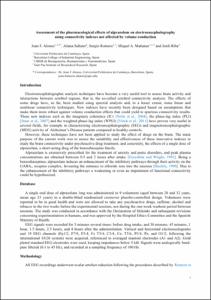 Except where otherwise noted, content on this work is licensed under a Creative Commons license : Attribution-NonCommercial-NoDerivs 3.0 Spain
Abstract
Electroencephalographic analysis techniques have become a very useful tool to assess brain activity and interactions between cerebral regions, that is, the so-called cerebral connectivity analysis. The effects of some drugs have, so far, been studied using spectral analysis and, to a lesser extent, some linear and nonlinear connectivity techniques. New indexes have recently been designed based on assumptions that make them more robust against volume conduction effects that could yield to spurious connectivity results. These new indexes such as the imaginary coherence (IC) [Nolte et al., 2004], the phase-lag index (PLI) [Stam et al., 2007] and the weighted phase-lag index (WPLI) [Vinck et al., 2011] have proven very useful in several fields, for example in characterizing electroencephalographic (EEG) and magnetoencephalographic (MEG) activity of Alzheimer’s Disease patients compared to healthy controls. However, these techniques have not been applied to study the effect of drugs on the brain. The main purpose of the current work was to assess the suitability and effectiveness of these innovative indexes to study the brain connectivity under psychoactive drug treatment, and concretely, the effects of a single dose of alprazolam, a short-acting drug of the benzodiazepine family. Alprazolam is extensively prescribed for the treatment of anxiety and panic disorders, and peak plasma concentrations are obtained between 0.5 and 2 hours after intake [Greenblat and Wright, 1993]. Being a benzodiazepines, alprazolam induces an enhancement of the inhibitory pathways through their activity on the GABA A receptor complex, favouring the entrance to chloride ions into the neurons [Haefely, 1990]. Due to the enhancement of the inhibitory pathways a weakening or even an impairment of functional connectivity could be hypothesized
CitationAlonso, J.F., Sabater, A., Romero, S., Mañanas, M.A., Riba, J. Assessment of the pharmacological effects of alprazolam on electroencephalography using connectivity indexes not affected by volume conduction. A: A Dialogue with the Cerebral Cortex: Cortical Function and Interfacing. "A Dialogue with the Cerebral Cortex: Cortical Function and Interfacing: April 29th and 30th , 2015". Barcelona: 2015, p. 1-4.
URIhttp://hdl.handle.net/2117/84695
DOI10.3389/conf.fnsys.2015.06.00008
ISBN1662-5137
Publisher versionhttp://www.frontiersin.org/Community/AbstractDetails.aspx?ABS_DOI=10.3389/conf.fnsys.2015.06.00008&eid=2889&sname=B%C2%B7DEBATE_|_A_Dialogue_with_the_Cerebral_Cortex_Cortical_Function_and_Interfacing_(Workshop)
Collections
Share: