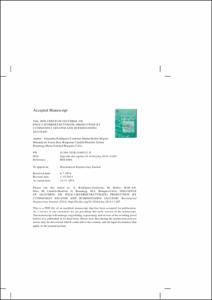 CovenanteeTechnische Universität Graz. Institut für Biotechnology und Bioprozesstechnik
Document typeArticle
Rights accessOpen Access
Abstract
Glycerol is a co-product of many industrial processes and is generated in large quantities from different origins. In this study, glycerol is used as a cheap carbon source for the production of poly(3- hydroxybutyrate) (PHB) with two different collection strains, Cupriavidus necator and Burkholderia sacchari, in order to provide an alternative outlet for glycerol and produce value-added bioproducts. The objective of this work was to study the influence of this carbon source on their growth kinetics, on their polymer production, and on the molecular mass of the produced biopolymer. Therefore, fermentations in bioreactors were carried out with these strains. Different results for both strains were obtained showing, for the first time, a high cell dry mass and growth rate, when glycerol was used together with glucose in the fermentation with C. necator. In the first fermentation with B. sacchari using glycerol as a sole carbon source, the strain properly developed synthesizing PHB. The biopolymers obtained from both fermentations with glycerol showed low molecular masses about 300 kDa with a polydispersity of 4.72 with C. necator, and 200 kDa with polydispersity of 2.50 with B. sacchari.
CitationRodríguez-Contreras, A., Koller, M., Miranda-de Sousa Dias, M., Calafell-Monfort, M., Braunegg, G., Marques, M.S. Influence of glycerol on poly(3-hydroxybutyrate) production by Cupriavidus necator and Burkholderia sacchari. "Biochemical engineering journal", 24 Febrer 2015, vol. 94, p. 50-57.
URIhttp://hdl.handle.net/2117/84686
ISSN1369-703X
Collections
Share: