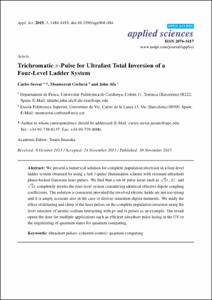 We present a numerical solution for complete population inversion in a four-level ladder system obtained by using a full p-pulse illumination scheme with resonant ultrashort phase-locked Gaussian laser pulses. We find that a set of pulse areas such as v3p , v2p , and v3p completely inverts the four-level system considering identical effective dipole coupling coefficients. The solution is consistent provided the involved electric fields are not too strong and it is amply accurate also in the case of diverse transition dipole moments. We study the effect of detuning and chirp of the laser pulses on the complete population inversion using the level structure of atomic sodium interacting with ps and fs pulses as an example. Our result opens the door for multiple applications such as efficient ultrashort pulse lasing in the UV or the engineering of quantum states for quantum computing.
CitationSerrat, C., Corbera-Subirana, M., Afa, I.J. Trichromatic pi-pulse for ultrafast total inversion of a four-level ladder system. "Applied sciences", 30 Novembre 2015, vol. 5, núm. 4, p. 1484-1493.
URIhttp://hdl.handle.net/2117/84540
DOI10.3390/app5041484
ISSN2076-3417
Publisher versionhttp://www.mdpi.com/2076-3417/5/4/1484