Gains and losses from collusion: an empirical study on market behaviors of China’s power enterprises 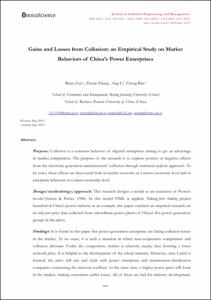 Show full item record
Gao, Ruize
Zhang, Zhenji
Li, Ang
Ran, Chang
Document typeArticle
PublisherOmniaScience
Rights accessOpen Access
Abstract
Purpose: Collusion is a common behavior of oligarch enterprises aiming to get an advantage in market competition. The purpose of the research is to explore positive or negative effects from the electricity generation manufacturers’ collusion through statistical analysis approach. To be exact, these effects are discovered both in market economy at a macro-economic level and in enterprise behaviors at a micro-economic level. Design/methodology/approach: This research designs a model as an extension of Porter’s model (Green & Porter, 1984). In this model FIML is applied. Taking price bidding project launched in China’s power industry as an example, this paper conducts an empirical research on its relevant price data collected from subordinate power plants of China’s five power generation groups in the pilots. Findings: It is found in this paper that power generation enterprises are facing collusion issues in the market. To be exact, it is such a situation in which non-cooperative competition and collusion alternate. Under the competition, market is relatively steady, thus forming a lower network price. It is helpful to the development of the whole industry. However, once Cartel is formed, the price will rise and clash with power enterprises and transmission-distribution companies concerning the interests conflicts. At the same time, a higher power price will form in the market, making consumers suffer losses. All of these are bad for industry development. Not only the collusion of power enterprises affects power price but also the market power that caused by long-time Cartel will reduce the market entrant in electricity generation. Market resources are centralized in the hands of Cartel, causing a low effective competition in the market, which has passive effects on users. Implications: The empirical research also indicates that collusion undoubtedly benefits the power enterprises that involved. As a cooperation pattern, collusion can lead to the synergy between relevant companies. However, collusion harms the benefits of other market entities. During the process of enterprises creating common interests cooperatively, collusion may bring harm to the outside industry. Originality/value: Using empirical research method, the paper takes China’s power industry as an example to show the gains and losses of collusion from two aspects, namely market economy and strategic management.
CitationGao, Ruize [et al.]. Gains and losses from collusion: an empirical study on market behaviors of China’s power enterprises. "Journal of Industrial Engineering and Management", Juliol 2015, vol. 8, núm. 3, p. 946-962.
URIhttp://hdl.handle.net/2117/84440
DLB-28744-2008
ISSN2013-0953
Collections
Share: