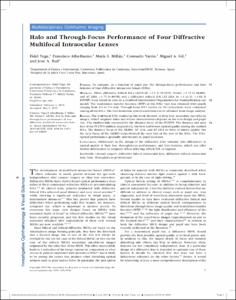 Gil Arnal, Miguel Ángel
Buil Calvo, José Antonio
Document typeArticle
Rights accessOpen Access
Abstract
PURPOSE. To compare, as a function of pupil size, the through-focus performance and halo features of four diffractive intraocular lenses (IOLs). METHODS. Three diffractive bifocal IOLs (ReSTOR þ2.5 D SV25T0, Tecnis þ2.75 D ZKB00, and AT LISA þ3.75 D 809M) and a diffractive trifocal IOL (AT LISA tri þ3.33 D, þ1.66 D 839MP) were tested in vitro in a modified International Organization for Standardization eye model. The modulation transfer function (MTF) at the IOLs’ foci was obtained with pupils ranging from 2.0 to 5.0 mm. Through-focus MTF curves (at 50 cycles/mm) were compared among all the IOLs. The halo formation and characteristics were obtained from image analysis. RESULTS. The multifocal IOLs studied in this work showed, at their foci, secondary out-of-focus images, which originate halos and whose characteristics depend on the lens design and pupil size. The smallest halo occurred for the distance focus of the SV25T0. The distance and near foci of the SV25T0 yielded, respectively, the best and lowest optical quality among the studied IOLs. The distance focus of the ZKB00, AT LISA, and AT LISA tri were of similar quality, but the near focus of the ZKB00 outperformed the near foci of the rest of the IOLs. The IOLs’ optical performance gradually deteriorates as pupil increases. CONCLUSIONS. Differences in the design of the diffractive IOLs translate into differences in optical quality at their foci, through-focus performance, and halo features, which can offer further information to surgeons when selecting which IOL to implant.
CitationVega, F., Alba, F., Millan, M., Varon, M., Gil , M., Buil, J. Halo and Through-Focus Performance of Four Diffractive Multifocal Intraocular Lenses. "Investigative ophthalmology and visual science", 05 Maig 2015, vol. 56, núm. 6, p. 3967-3975.
URIhttp://hdl.handle.net/2117/84303
DOI10.1167/iovs.15-16600
ISSN0146-0404
Collections
Share: