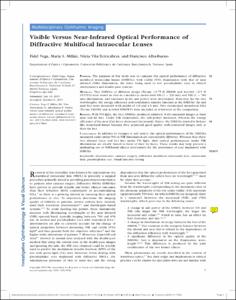 Vila Terricabras, Nuria
Alba Bueno, Francisco
Document typeArticle
Rights accessOpen Access
Abstract
© 2015 The Association for Research in Vision and Ophthalmology, Inc. PURPOSE. The purpose of this study was to compare the optical performance of diffractive multifocal intraocular lenses (DMIOLs) with visible (VIS) illumination with that of near infrared (NIR) illumination, the latter being used to test pseudophakic eyes in clinical aberrometers and double-pass systems. METHODS. Two DMIOLs of different design (Tecnis +2.75 D ZKB00 and AcrySof +2.5 D SV25T0) were tested in vitro in a model eye under both VIS (¿ 530 nm) and NIR (¿ 780 nm) illumination, and variations in the add power of the lenses were determined. Moreover, for the two wavelengths, the energy efficiency and modulation transfer function at the DMIOLs’ far and near foci were measured with pupils of 3.0 and 4.5 mm. Two counterpart monofocal IOLs (Tecnis ZA9003 and AcrySof SN60WF) were included as references in the comparison. RESULTS. With VIS light, the two DMIOLs produced relatively well-contrasted images at their near and far foci. Under NIR illumination, the add power increased, whereas the energy efficiency of the near focus decreased and that of far focus increased. Hence, the DMIOLs tended to behave like monofocal lenses because they generated good quality well-contrasted images only at their far foci. CONCLUSIONS. In addition to changes in add power, the optical performances of the DMIOLs measured under either VIS or NIR illumination are considerably different. Whereas they show two distinct (near and far) foci under VIS light, their optical performances under NIR illumination are clearly biased in favor of their far focus. These results may help prevent a misleading use of NIR-based clinical instruments for the assessment of eyes implanted with DMIOLs.
CitationVega, F., Millan, M., Vila, N., Alba, F. Visible versus near-infrared optical performance of diffractive multifocal intraocular lenses. "Investigative ophthalmology and visual science", 01 Novembre 2015, vol. 56, núm. 12, p. 7345-7351.
URIhttp://hdl.handle.net/2117/84301
DOI10.1167/iovs.15-17664
ISSN0146-0404
Collections
Share: