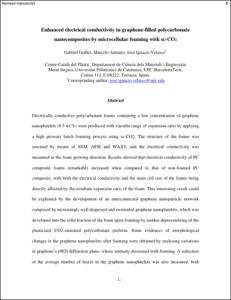 Electrically conductive polycarbonate (PC) foams containing a low concentration of graphene nanoplatelets (0.5 wt.%) were produced with variable range of expansion ratio by applying a high-pressure batch foaming process using sc-CO2. The structure of the foams was assessed by means of SEM, AFM and WAXS, and the electrical conductivity was measured in the foam growing direction. Results showed that electrical conductivity of PC composite foams remarkably increased when compared to that of non-foamed PC composite, with both the electrical conductivity and the main cell size of the foams being directly affected by the resultant expansion ratio of the foam. This interesting result could be explained by the development of an interconnected graphene nanoparticle network composed by increasingly well-dispersed and reoriented graphene nanoplatelets, which was developed into the solid fraction of the foam upon foaming by sudden depressurising of the plasticised CO2-saturated PC preform. Some evidences of morphological changes in the graphene nanoplatelets after foaming were obtained by analysing variations in graphene’s (0 0 2) diffraction plane, whose intensity decreased with foaming. A reduction of the average number of layers in the graphene nanoplatelets was also measured, both evidences indicating that improved dispersion of graphene nanoparticles existed in the PC composite foams. As a result, foams with a proper combination of low density and enhanced electrical conductivity could be produced, enabling them to be used in applications such as electromagnetic interference shielding.