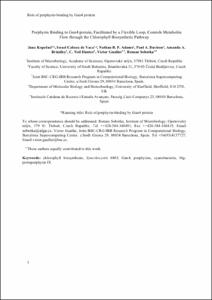 Show full item record
Kopečná, Jana
Cabeza de Vaca, Israel
Ademas, Nathan B. P.
Davison, Paul A.
Brindley, Amanda A.
Hunter, C. Neil
Guallar, Víctor
Sobotka, Roman
Document typeArticle
PublisherAmerican Society for Biochemistry and Molecular Biology
Rights accessOpen Access
All rights reserved. This work is protected by the corresponding intellectual and industrial property rights. Without prejudice to any existing legal exemptions, reproduction, distribution, public communication or transformation of this work are prohibited without permission of the copyright holder
ProjectPELE - P.E.L.E (Protein Energy Landscape Exploration): a la carte drug design tools (EC-FP7-250277)
Abstract
In oxygenic phototrophs, chlorophylls, hemes and bilins are synthesized by a common branched pathway. Given the phototoxic nature of tetrapyrroles, this pathway must be tightly regulated and an important regulatory role is attributed to Mgchelatase enzyme at the branching between the heme and chlorophyll pathway. Gun4 is a porphyrin-binding protein known to stimulate in vitro the Mg-chelatase activity but how the Gun4-porphyrin complex acts in the cell was unknown. To address this issue we first performed simulations to determine the porphyrin-docking mechanism to the cyanobacterial Gun4 structure. After correcting crystallographic loop contacts, we determined the binding site for Mgprotoporphyrin IX. It revealed that the orientation of 6/7 loop is critical for the binding and the magnesium ion held within the porphyrin is coordinated by Asn211 residue. We also identified the basis for stronger binding in the Gun4-1 variant and for weaker binding in the W192A mutant. The W192A-Gun4 was further characterized in Mg-chelatase assay showing that tight porphyrin-binding in Gun4 facilitates its interaction with the Mg-chelatase ChlH subunit. Finally, we introduced the W192A mutation into Synechocystis 6803 cells and show that the Gun4-porphyrin complex is important for the accumulation of ChlH and for channeling metabolites into the chlorophyll biosynthetic pathway.
CitationKopečná, Jana [et al.]. Porphyrin Binding to Gun4 protein, Facilitated by a Flexible Loop, Controls Metabolite Flow through the Chlorophyll Biosynthetic Pathway. "The Journal of Biological Chemistry", 07 Octubre 2015, vol. 290, p. 28477-28488.
URIhttp://hdl.handle.net/2117/84233
DOI10.1074/jbc.M115.664987
ISSN0021-9258
Publisher versionhttp://www.jbc.org/content/290/47/28477.long
Collections
Share: