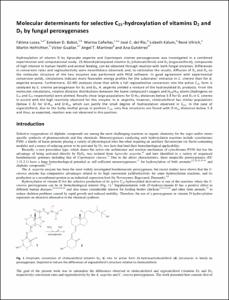 Hydroxylation of vitamin D by Agrocybe aegerita and Coprinopsis cinerea peroxygenases was investigated in a combined experimental and computational study. 25-Monohydroxylated vitamin D3 (cholecalciferol) and D2 (ergocalciferol), compounds of high interest in human health and animal feeding, can be obtained through reaction with both fungal enzymes. Differences in conversion rates and regioselectivity were nevertheless observed, and, to rationalize the results, diffusion of D2 and D3 on the molecular structure of the two enzymes was performed with PELE software. In good agreement with experimental conversion yields, simulations indicate more favorable energy profiles for the substrates’ entrance in C. cinerea than for A. aegerita enzyme. Furthermore, GC-MS analyses show that while a full regioselective conversion into the active C25 form is catalyzed by C. cinerea peroxygenase for D2 and D3, A. aegerita yielded a mixture of the hydroxylated D3 products. From the molecular simulations, relative distance distributions between the haem compound I oxygen and H24/H25 atoms (hydrogens on C24 and C25 respectively) were plotted. Results show large populations for O-H25 distances below 3 Å for D2 and D3 in C. cinerea in accord with the high reactivity observed for this enzyme. In A. aegerita, however, cholecalciferol has similar populations (below 3 Å) for O-H25 and O-H24 which can justify the small degree of hydroxylation observed in C24. In the case of ergocalciferol, due to the bulky methyl group in position C24, very few structures are found with O-H24 distances below 3 Å and thus, as expected, reaction was not observed in this position.
CitationLucas, Fátima [et al.]. Molecular determinants for selective C 25-hydroxylation of vitamins D 2 and D 3 by fungal peroxygenases. "Catalysis Science & Technology", 07 Agost 2015, vol. 6, p. 288-295.
URIhttp://hdl.handle.net/2117/84192
DOI10.1039/C5CY00427F
ISSN2044-4753
Publisher versionhttp://pubs.rsc.org/en/content/articlelanding/2015/cy/c5cy00427f