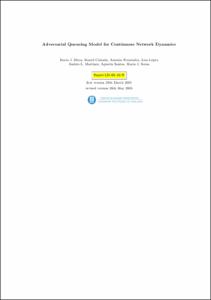 Document typeExternal research report
Rights accessOpen Access
Abstract
In this paper we start the study of generalizing the Adversarial Queueing Theory (AQT) model towards a continuous scenario in which the usually assumed synchronicity of the evolution is not required anymore. We consider a model, named "continuous AQT" (CAQT), in which packets can have arbitrary (not null and not infinite) lengths, and the network links may have different speeds (or bandwidths) and propagation delays. We show that, in such a general model, having bounded queues implies bounded end-to-end packet delays and vice versa. From the network point of view, we show that networks with directed acyclic topologies are universally stable, i.e., stable independently of the protocols and the traffic patterns used in it, and that this even holds for traffic patterns that make links to be fully loaded. Concerning packet scheduling protocols, we show that the well-known LIS, SIS, FTG and NTS protocols remain universally stable in our model. We also show that the CAQT model is strictly stronger than the AQT model by presenting scheduling policies that are unstable under the former while they are universally stable under the latter.
CitationBlesa, M., Calzada, D., Fernández, A., López, L., Martínez, A., Santos, A., Serna, M. "Adversarial queueing model for continuous network dynamics". 2005.
Is part ofLSI-05-10-R
URIhttp://hdl.handle.net/2117/84188
Collections
Share: