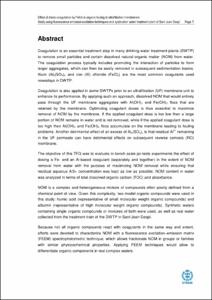 Document typeBachelor thesis
Rights accessOpen Access
Abstract
Coagulation is an essential treatment step in many drinking water treatment plants (DWTP) to remove small particles and certain dissolved natural organic matter (NOM) from water. The coagulation process typically includes promoting the interaction of particles to form larger aggregates, which can then be easily removed in subsequent sedimentation basins. Alum (Al2(SO4)3 and iron (III) chloride (FeCl3) are the most common coagulants used nowadays in DWTP. Coagulation is also applied in some DWTPs prior to an ultrafiltration (UF) membrane unit to enhance its performance. By applying such an approach, dissolved NOM that would entirely pass through the UF membrane aggregates with Al(OH)3 and Fe(OH)3 flocs that are retained by the membrane. Optimizing coagulant doses is thus essential to maximize removal of NOM by the membrane. If the applied coagulant dose is too low then a large portion of NOM remains in water and is not removed, while if the applied coagulant dose is too high then Al(OH)3 and Fe(OH)3 flocs accumulate on the membrane leading to fouling problems. Another detrimental effect of an excess of Al2(SO4)3 is that residual Al3+ remaining in the UF permeate can have detrimental effects on subsequent reverse osmosis (RO) membrane. The objective of this TFG was to evaluate in bench-scale jar-tests experiments the effect of dosing a Fe- and an Al-based coagulant (separately and together) in the extent of NOM removal from water with the purpose of maximizing NOM removal while ensuring that residual aqueous Al3+ concentration was kept as low as possible. NOM content in water was analyzed in terms of total dissolved organic carbon (TOC) and absorbance. NOM is a complex and heterogeneous mixture of compounds often poorly defined from a chemical point of view. Given this complexity, two model organic compounds were used in this study: humic acid (representative of small molecular weight organic compounds) and albumin (representative of high molecular weight organic compounds). Synthetic waters containing single organic compounds or mixtures of both were used, as well as real water collected from the treatment train of the DWTP in Sant Joan Despí. Because not all organic compounds react with coagulants in the same way and extent, efforts were devoted to characterize NOM with a fluorescence excitation–emission matrix (FEEM) spectrophotometric technique, which allows fractionate NOM in groups or families with similar physicochemical properties. Applying FEEM techniques would allow to differentiate organic components in real complex waters.
SubjectsSewage -- Purification, Ultrafiltration, Membranes (Technology), Aigües residuals -- Depuració, Ultrafiltració, Membranes (Tecnologia)
Location
1: 08970 Sant Joan Despí, Barcelona, Espanya
URIhttp://hdl.handle.net/2117/84173
Collections
Share: