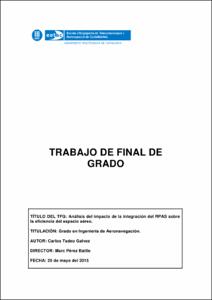 Document typeBachelor thesis
Rights accessOpen Access
Abstract
This work has assessed the impact of the introduction of a Remotely-Piloted Aircraft System (RPAS) in non-segregated airspace using the flight inefficiency concept with flight traffic data. Three different cases have been designed in order to analyze this integration: · Case 1: Flights without Air Traffic Operator (ATCo) supervision · Case 2: Flights with ATCo supervision · Case 3: Flights without ATCo supervision and RPAS mission Case 1 assesses the nominal flight plan without constraints of any external action, e.g., Central Flow Management Unit (CFMU) or ATCo. In Case 2, the paths flown by aircraft are analyzed once they have been supervised. Finally, in Case 3, flight inefficiency is computed using the same flight data but with the interaction of a RPAS mission which takes place in the same airspace. The needed flight data have been generated using the Early Demonstration and Evaluation Platform (eDEP) simulator which generates trajectory paths from nominal flight plans. Those flight plans have been extracted from Network Strategic Tool (NEST). Both platforms belong to EUROCONTROL. These simulations have been carried out in two sectors of the Spanish airspace where two ATCo have acted as sector managers during the real-time exercise. Lateral and vertical flight inefficiency metrics are developed based on the difference between the actual and the base path of a flight. Lateral base trajectory is created using the great circle concept which provides the minimum distance between two points located on the Earth's surface. The vertical one, is generated following the dynamic model used by eDEP and the needed operating constraints related with the rate of climb or descend and acceleration stages. Results show that the vertical flight inefficiency between the Case 2 and Case 3 has increased of 7% and the lateral one of 2% This assessment is based on the study of the RPAS inefficiency impact in two sectors, it has caused that the data from the simulator only refer to a single part of the entire flight. In order to apply the flight inefficiency metrics on each flight procedure, the flight data files, m1 and m3, extracted from NEST, has been analyzed. Distinctions have been made between the departure terminal area, en route and arrival terminal area airspace in order to identify the relative importance of each region. Differences between the obtained m1 and m3 results are representative of the ATCo restrictions impact in the current Air Traffic Management (ATM) system. These results are also discussed.
SubjectsDrone aircraft, Avions no tripulats, Avions no tripulats -- Sistemes de control
URIhttp://hdl.handle.net/2117/84161
Collections
Share: