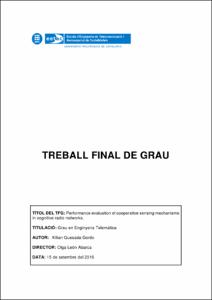 C ognitive radio networks consist of intelligent devices that perform continuo us monitoring of the RF spectrum to locate and use frequency bands that are temporarily free . That is , those bands used by licensed or primary users that are not broadcasting at this time. Through cooperative monitoring the different node s in a network rep ort reports about the state of the several channels (free or busy) to a node provided with some intelligence known as the fusion center. This node is able to combine all information received in the different repo rts and make a final decision about the stat us of the network in terms of occupancy and quality (SNR) as well as inform ing the other nodes of the network on whether or not using the frequency band previously monitored. Because they are wireless, cognitive radio networks can become vul nerable to atta cks such as the b yzantine attack by malicious entities. This attack is based on falsifying reports of network ’s nodes sent to the fusion center and can lead to a wrong decision in the fusion center, and as a result the use of a frequency band that is not f ree at that moment , or vice versa. The aim of this project is to evaluate cooperative monitoring mechanisms that are robust to the b yzantine attack s on cognitive radio networks. With this purpose, we used Matlab software to simulate various scenario s an d assess the impact of the b yzantine attack in cognitive radio networks’ operation in terms of probability of detection and false alarm probability, that is, the probability that final decision of fusion center is correct or not, under the presence or abse nce of primary user or not, respectively. In addition, we have compared the simulation results with those obtained by analytical expressions. Also, since there is the possibility that the secondary nodes become compromised by an attacker in order to falsif y their reports , various methods which objective is to identify and exclude the suspected nodes that can be falsifying its reports in order to prevent the wrong functioning of the network have been evaluated.
SubjectsCognitive radio networks, Software radio, Ràdio definida per programari, Comunicació sense fil, Sistemes de
URIhttp://hdl.handle.net/2117/84151