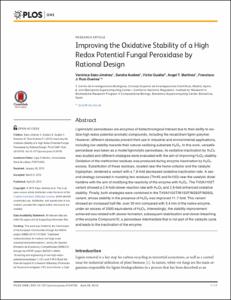 Improving the Oxidative Stability of a High.pdf (1,472Mb)
Share:

Except where otherwise noted, content on this work is licensed under a Creative Commons license : Attribution 4.0 International
ProjectBUSQUEDA E INGENIERIA DE NUEVAS PEROXIDASAS FUNGICAS DE ALTO POTENCIAL REDOX (MICINN-BIO2011-26694)
INDOX - Optimized oxidoreductases for medium and large scale industrial biotransformations (EC-FP7-613549)
Abstract
Ligninolytic peroxidases are enzymes of biotechnological interest due to their ability to oxidize high redox potential aromatic compounds, including the recalcitrant lignin polymer. However, different obstacles prevent their use in industrial and environmental applications, including low stability towards their natural oxidizing-substrate H2O2. In this work, versatile peroxidase was taken as a model ligninolytic peroxidase, its oxidative inactivation by H2O2 was studied and different strategies were evaluated with the aim of improving H2O2 stability. Oxidation of the methionine residues was produced during enzyme inactivation by H2O2 excess. Substitution of these residues, located near the heme cofactor and the catalytic tryptophan, rendered a variant with a 7.8-fold decreased oxidative inactivation rate. A second strategy consisted in mutating two residues (Thr45 and Ile103) near the catalytic distal histidine with the aim of modifying the reactivity of the enzyme with H2O2. The T45A/I103T variant showed a 2.9-fold slower reaction rate with H2O2 and 2.8-fold enhanced oxidative stability. Finally, both strategies were combined in the T45A/I103T/M152F/M262F/M265L variant, whose stability in the presence of H2O2 was improved 11.7-fold. This variant showed an increased half-life, over 30 min compared with 3.4 min of the native enzyme, under an excess of 2000 equivalents of H2O2. Interestingly, the stability improvement achieved was related with slower formation, subsequent stabilization and slower bleaching of the enzyme Compound III, a peroxidase intermediate that is not part of the catalytic cycle and leads to the inactivation of the enzyme.
CitationSáez-Jiménez, Veronica [et al.]. Improving the Oxidative Stability of a High Redox Potential Fungal Peroxidase by Rational Design. "PLOS ONE", 29 Abril 2015, vol. 10, núm. 4.
URIhttp://hdl.handle.net/2117/84149
DOI10.1371/journal.pone.0124750
ISSN1932-6203
Publisher versionhttp://journals.plos.org/plosone/article?id=10.1371/journal.pone.0124750
Collections
Share: