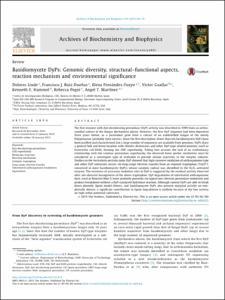 Except where otherwise noted, content on this work is licensed under a Creative Commons license : Attribution-NonCommercial-NoDerivs 4.0 International
ProjectDISENYO COMPUTACIONAL RACIONAL DE OXIDOREDUCTASAS PARA APLICACIONES INDUSTRIALES Y TECNOLOGICAS (MINECO-CTQ2013-48287-R)
INDOX - Optimized oxidoreductases for medium and large scale industrial biotransformations (EC-FP7-613549)
Abstract
The first enzyme with dye-decolorizing peroxidase (DyP) activity was described in 1999 from an arthroconidial culture of the fungus Bjerkandera adusta. However, the first DyP sequence had been deposited three years before, as a peroxidase gene from a culture of an unidentified fungus of the family Polyporaceae (probably Irpex lacteus). Since the first description, fewer than ten basidiomycete DyPs have been purified and characterized, but a large number of sequences are available from genomes. DyPs share a general fold and heme location with chlorite dismutases and other DyP-type related proteins (such as Escherichia coli EfeB), forming the CDE superfamily. Taking into account the lack of an evolutionary relationship with the catalase-peroxidase superfamily, the observed heme pocket similarities must be considered as a convergent type of evolution to provide similar reactivity to the enzyme cofactor. Studies on the Auricularia auricula-judae DyP showed that high-turnover oxidation of anthraquinone type and other DyP substrates occurs via long-range electron transfer from an exposed tryptophan (Trp377, conserved in most basidiomycete DyPs), whose catalytic radical was identified in the H2O2-activated enzyme. The existence of accessory oxidation sites in DyP is suggested by the residual activity observed after site-directed mutagenesis of the above tryptophan. DyP degradation of substituted anthraquinone dyes (such as Reactive Blue 5) most probably proceeds via typical one-electron peroxidase oxidations and product breakdown without a DyP-catalyzed hydrolase reaction. Although various DyPs are able to break down phenolic lignin model dimers, and basidiomycete DyPs also present marginal activity on nonphenolic dimers, a significant contribution to lignin degradation is unlikely because of the low activity on high redox-potential substrates
CitationLinde, Dolores [et al.]. Basidiomycete DyPs: Genomic diversity, structural–functional aspects, reaction mechanism and environmental significance. "Archives of Biochemistry and Biophysics", 15 Maig 2015, vol. 574, p. 66-74.
URIhttp://hdl.handle.net/2117/84145
DOI10.1016/j.abb.2015.01.018
ISSN0003-9861
Publisher versionhttp://www.sciencedirect.com/science/article/pii/S0003986115000430
Collections
Share: