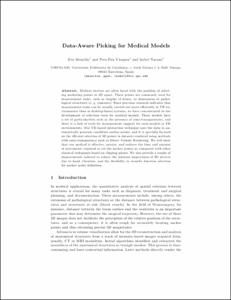 Document typePart of book or chapter of book
PublisherSpringer
Rights accessOpen Access
Abstract
Medical doctors are often faced with the problem of selecting anchoring points in 3D space. These points are commonly used for measurement tasks, such as lengths of bones, or dimensions of pathological structures (e. g. tumors). Since previous research indicates that measurement tasks can be usually carried out more efficiently in VR environments than in desktop-based systems, we have concentrated on the development of selection tools for medical models. These models have a set of particularities such as the presence of semi-transparencies, and there is a lack of tools for measurement support for such models in VR environments. Our VR-based interaction technique uses the data to automatically generate candidate anchor points, and it is specially focused on the efficient selection of 3D points in datasets rendered using methods with semi-transparency such as Direct Volume Rendering. We will show that our method is effective, precise, and reduces the time and amount of movements required to set the anchor points as compared with other classical techniques based on clipping planes. We also provide a couple of improvements tailored to reduce the inherent imprecision of 3D devices due to hand vibration, and the flexibility in transfer function selection for anchor point definition.
CitationMonclús, E., Vazquez, P., Navazo, I. Data-aware picking for medical models. A: "Computer vision, imaging and computer graphics : theory and applications : International Joint Conference, VISIGRAPP 2013 : Barcelona, Spain, February 21-24, 2013 : revised selected papers". Berlín: Springer, 2014, p. 50-65.
URIhttp://hdl.handle.net/2117/84130
DOI10.1007/978-3-662-44911-0
ISBN978-3-662-44911-0
Publisher versionhttp://www.springer.com/978-3-662-44910-3
Collections
Share: