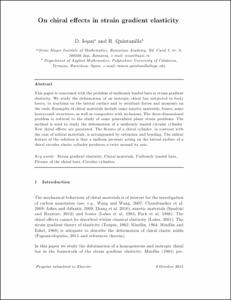 Document typeArticle
Rights accessOpen Access
Abstract
This paper is concerned with the problem of uniformly loaded bars in strain gradient elasticity. We study the deformation of an isotropic chiral bar subjected to body forces, to tractions on the lateral surface and to resultant forces and moments on the ends. Examples of chiral materials include some auxetic materials, bones, some honeycomb structures, as well as composites with inclusions. The three-dimensional problem is reduced to the study of some generalized plane strain problems. The method is used to study the deformation of a uniformly loaded circular cylinder. New chiral effects are presented. The flexure of a chiral cylinder, in contrast with the case of achiral materials, is accompanied by extension and bending. The salient feature of the solution is that a uniform pressure acting on the lateral surface of a chiral circular elastic cylinder produces a twist around its axis.
CitationIesan, D., Quintanilla, R. On chiral effects in strain gradient elasticity. "European journal of mechanics. A, Solids", 01 Juliol 2016, vol. 58, p. 233-246.
URIhttp://hdl.handle.net/2117/84128
DOI10.1016/j.euromechsol.2016.02.001
ISSN0997-7538
Collections
Share: