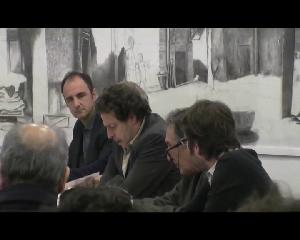 ; Escola Tècnica Superior d'Arquitectura de Barcelona; Universitat Politècnica de Catalunya. Departament de Projectes Arquitectònics
Document typeAudiovisual
Rights accessOpen Access
Abstract
Realism in architecture is a "mutant' concept which admits multiple meanings. Accordingly it would be more precise to talk about realism - in plural - and to try to properly place each one in the contemporary context. at the same time, the relation between realism and architecture is not precise and specific anymore, we could even say it is not "real" any longer and, paradoxically, it has become more abstract. This new situation has a reason: the multiplicity of meanings that architectural realism has assumed. Trends which use architecture adjectivally are increasing more and more. For example, we can talk about high tech, iconic, virtual, sustainable, modern, commercial, classic-postmodern, or real architecture, among others. Facing this architectural variety, the debate between "realist" and "non realist" is increasingly becoming a complex issue. ln the architectural context, the main difficulty in order ta comprehend realism and specifically critic realism is precisely the definition of the meaning of "realism". We usually refer to realism in terms of what has meant in the past and not what it means in the present. The recognition of architecture realism's mutability and therefore the multiplicity of meanings establish a starting point tor this research. Among all realisms, there is one which assumes a critical attitude and a commitment with the built city as well as with the complexity of the new information Age and of globalization. In turn, architectural critical realism also assumes different forms which place it in the frame of resistance to the global; cammunicative and urban integration will; social and environmental commitment; technological development and programmatic pragmatism. This research approaches the (fragmented) definition of architectural critical realism through the study of projects built in Western Europe since 1980s and supported with references from postwar reaism (1950-1960) and the artistic and literary realism of the second half of the 191th century. Architecture of critic realism claims to be an "ethic attitude" as new brutalism was in the postwar and also in the 19th century. This attitude settles ils architectural proposals in the knowledge of reality understood as a physical, social, political, economical, technological and cultural context. It recognizes the complexity of globalization and of the new information age. At the same time it assumes a strong commitment with the built city, society and archilectural discipline. The age of simultaneity-which chronologically contextualizes this research - is a consequence of the technological and informative revolution consolidated since the 1990s at the same time as the global transfer from analogical to digital was taking place. In the architectural environment we can recognize simultaneity in hybrid programs, the new professinal partenship (increasing collaboration with consultants) and the new construction management systems (for example the fast track). One of the consequences of simultaneity is the difficulty in information management. ln this aspect, critic realism always tries to work with the essential information required for an architectural design. The built city is the natural scenario for the critic and realist attitude; a city which is the result of globalization effects such as urbanalization of historic centers and outs kirts, and the inevitable absorption of the periphery -which was one of the big issues of the 1980s. Critic realism intervenes in this context aiming to revitalize, transofrm, restore and even demolish it if necessary. In any case critic realism always acts with the aim to build or rebuild the identity of the built city and to set up the idea of urban sense of belonging.
Description
Presentació de Tesi Doctoral de Ferran Grau Valldosera. Director: Josep Lluís Mateo (Swiss Federal institute of Technology in Zurich (ETHZ). Co-director: Eduard Bru (PA-ETSAB). Departament de Projectes Arquitectònics. Escola Tècnica Superior d'Arquitectura de Barcelona, Universitat Politècnica de Catalunya. Tesi Doctoral dipositada a TDX:http://hdl.handle.net/10803/134688
SubjectsArchitecture--Designs and plans, Arquitectura--Projectes, Realisme critic
Related documenthttp://hdl.handle.net/10803/134688
URIhttp://hdl.handle.net/2117/84109
Collections
Share: