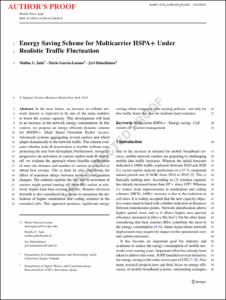 In the near future, an increase in cellular network density is expected to be one of the main enablers to boost the system capacity. This development will lead to an increase in the network energy consumption. In this context, we propose an energy efficient dynamic scheme for HSDPA + (High Speed Downlink Packet Access-Advanced) systems aggregating several carriers and which adapts dynamically to the network traffic. The scheme evaluates whether node-B deactivation is feasible without compromising the user flow throughput. Furthermore, instead of progressive de-activation of carriers and/or node-B switch-off, we evaluate the approach where feasible combination of inter-site distance and number of carriers is searched to obtain best savings. This is done by also considering the effect of transition delays between network configuration changes. The solution exploits the fact that re-activation of carriers might permit turning off other BSs earlier at relatively higher load than existing policies. Remote electrical downtilt is also considered as a means to maximize the utilization of higher modulation and coding schemes in the extended cells. This approach promises significant energy savings when compared with existing policies - not only for low traffic hours but also for medium load scenarios.