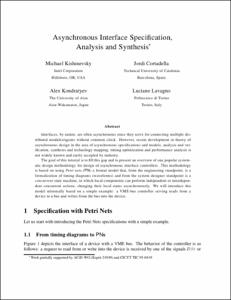 Kondratyev, A
Lavagno, L
Document typeResearch report
Rights accessOpen Access
All rights reserved. This work is protected by the corresponding intellectual and industrial property rights. Without prejudice to any existing legal exemptions, reproduction, distribution, public communication or transformation of this work are prohibited without permission of the copyright holder
Abstract
Interfaces, by nature, are often asynchronous since they serve for connecting multiple distributed modules/agents without common clock. However, recent development in theory of asynchronous design in the area of asynchronous specifications and models, analysis and verification, synthesis and technology mapping, timing optimization and performance analysis is not widely known and rarely accepted by industry. The goal of this paper is to fill this gap and to present an overview of one popular systematic design methodology for design of asynchronous interface controllers. This methodology is based on using Petri nets, a formal model that, from the engineering standpoint, is a formalization of timing diagrams (waveforms) and from the system designer standpoint is a concurrent state machine, in which local components can perform independent or interdependent concurrent actions, changing their local states asynchronously. We will introduce this model informally based on a simple example: a VME-bus controller serving reads from a device to a bus and writes from the bus into the device.
CitationKishinewsky, M., Cortadella, J., Kondratyev, A., Lavagno, L. "Asynchronous interface specification, analysis and synthesis". 1998.
Is part ofLSI-98-14-R
URIhttp://hdl.handle.net/2117/84044
Collections
Share: