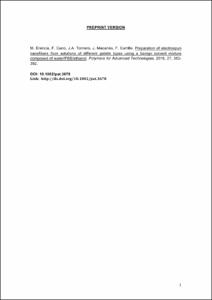 Document typeArticle
Rights accessOpen Access
All rights reserved. This work is protected by the corresponding intellectual and industrial property rights. Without prejudice to any existing legal exemptions, reproduction, distribution, public communication or transformation of this work are prohibited without permission of the copyright holder
Abstract
The feasibility of using Phosphate Buffer Saline (PBS)/ethanol mixtures as a benign solvent to electrospin three types of gelatin was studied. Gelatins with different chemical properties, such as Bloom, were selected and the effect of the gelatin nature and its concentration on the electrospinnability of the dope solution and on the fiber diameter of the electrospun mats were studied. Viscosity of the gelatin solution, which follows a power law relationship with the gelatin concentration, was found to significantly influence the morphology of the mats and the fiber diameter. It was demonstrated that the PBS/ethanol solvent interacted with the gelatins as a good solvent with a Flory exponent of 0.65. In addition, the effect of the solvent composition on the fiber formation process was evaluated corroborating that the ionic strength of the medium and the PBS/ethanol ratio significantly affected the morphology and the diameter of the electrospun fibers. Chemical structure and thermal stability of the electrospun gelatin mats were characterized by Fourier Transform Infrared Spectroscopy (FTIR) and Differential Scanning Calorimetry (DSC). Finally, cytotoxicity of the electrospun mats was analyzed by the Alamar Blue assay, using human foreskin fibroblasts (BJ-5ta), resulting in a high cell viability (80-90%) regardless the type of gelatin
CitationErencia, M., Cano, F., Tornero, J., Macanás, J., Carrillo, F. Preparation of electrospun nanofibers from solutions of different gelatin types using a benign solvent mixture composed of water/PBS/ethanol. "Polymers for advanced technologies", 01 Març 2016, vol. 27, núm. 3, p. 382-392.
URIhttp://hdl.handle.net/2117/83969
DOI10.1002/pat.3678
ISSN1042-7147
Publisher versionhttp://onlinelibrary.wiley.com/doi/10.1002/pat.3678/full
Collections
Share: