Impact of the economic and political changes on consumers’ wine preferences in Catalonia (Spain): a generalized multinomial logit approach 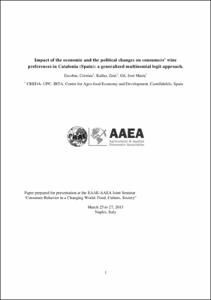 Document typeConference lecture
Rights accessOpen Access
Abstract
The international economic crisis, which began in 2007, has had a devastating impact on the Spanish economy. Consequently, there is been a sharp drop in consumption and fixed capital investment. An example of the impact of the economic crisis in the Spanish food market is the growth of private labels which have raised their market share during all this period. Political changes have also occurred in the recent years. In this context, our main goal is to determine consumers’ preferences towards wine in Catalonia as well as to assess whether consumers adjust themselves to the newer economic and political scenario. In particular, we will focus our interest in those preferences regarding the regional origin of the wine. To tackle this issue Discrete Choice Experiments were implemented and results were modelled by means of the Generalized Multinomial Logit model (GMNL). The GMNL can decompose unobserved heterogeneity into taste heterogeneity and scale heterogeneity. Two surveys were conducted: before and during the economic crisis, in 2008 and in 2010, with 400 and 401 consumers, respectively. The results show that consumers’ wine preferences from both contexts have changed. During the crisis consumers tend to show less heterogeneous responses.
CitationEscobar, C., Kallas, Z., Gil, J.M. Impact of the economic and political changes on consumers’ wine preferences in Catalonia (Spain): a generalized multinomial logit approach. A: European Association of Agricultural Economists Seminar. "proceeding of the 143 EAAe seminar". Napoli: 2015.
URIhttp://hdl.handle.net/2117/83961
Publisher versionhttp://econpapers.repec.org/paper/agseaa143/202730.htm
Collections
Share: