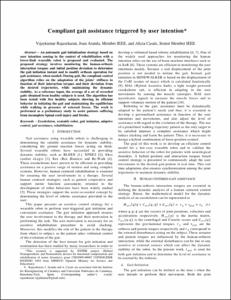 Document typeConference report
PublisherInstitute of Electrical and Electronics Engineers (IEEE)
Rights accessOpen Access
All rights reserved. This work is protected by the corresponding intellectual and industrial property rights. Without prejudice to any existing legal exemptions, reproduction, distribution, public communication or transformation of this work are prohibited without permission of the copyright holder
Abstract
An automatic gait initialization strategy based on user intention sensing in the context of rehabilitation with a lower-limb wearable robot is proposed and evaluated. The proposed strategy involves monitoring the human-orthosis interaction torques and initial position deviation to determine the gait initiation instant and to modify orthosis operation for gait assistance, when needed. During gait, the compliant control algorithm relies on the adaptation of the joints' stiffness in function of their interaction torques and their deviation from the desired trajectories, while maintaining the dynamic stability. As a reference input, the average of a set of recorded gaits obtained from healthy subjects is used. The algorithm has been tested with five healthy subjects showing its efficient behavior in initiating the gait and maintaining the equilibrium while walking in presence of external forces. The work is performed as a preliminary study to assist patients suffering from incomplete Spinal cord injury and Stroke.
CitationRajasekaran, V., Aranda, J., Casals, A. Compliant gait assistance triggered by user intention. A: Annual International Conference of the IEEE Engineering in Medicine and Biology Society. "2015 37th Annual International Conference of the IEEE Engineering in Medicine and Biology Society (EMBC 2015)". Milan: Institute of Electrical and Electronics Engineers (IEEE), 2015, p. 3885-3888.
URIhttp://hdl.handle.net/2117/83941
DOI10.1109/EMBC.2015.7319242
ISBN9781424492695
Publisher versionhttp://ieeexplore.ieee.org/xpl/articleDetails.jsp?arnumber=7319242
Collections
Share: