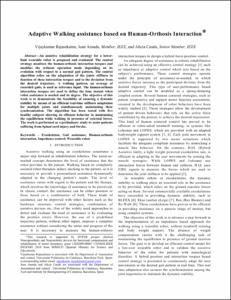 Document typeConference report
PublisherInstitute of Electrical and Electronics Engineers (IEEE)
Rights accessOpen Access
Abstract
An assistive rehabilitation strategy for a lower-limb wearable robot is proposed and evaluated. The control strategy monitors the human-orthosis interaction torques and modifies the orthosis operation mode depending on its evolution with respect to a normal gait pattern. The control algorithm relies on the adaptation of the joints stiffness in function of these interaction torques and to the deviation from the desired trajectory. A walking pattern, an average of recorded gaits, is used as reference input. The human-orthosis interaction torques are used to define the time instant when robot assistance is needed and its degree. The objective of this work is to demonstrate the feasibility of ensuring a dynamic stability by means of an efficient real-time stiffness adaptation for multiple joints and simultaneously maintaining their synchronization. The algorithm has been tested with five healthy subjects showing its efficient behavior in maintaining the equilibrium while walking in presence of external forces. The work is performed as a preliminary study to assist patients suffering from Spinal cord injury and Stroke.
CitationRajasekaran, V., Aranda, J., Casals, A. Adaptive walking assistance based on human-orthosis interaction. A: IEEE/RSJ International Conference on Intelligent Robots and Systems. "IROS Hamburg 2015: IEEE/RSJ International Conference on Intelligent Robots and Systems: September 28-October 02, 2015, Hamburg, Germany". Hamburg: Institute of Electrical and Electronics Engineers (IEEE), 2015, p. 6190-6195.
URIhttp://hdl.handle.net/2117/83939
DOI10.1109/IROS.2015.7354260
Publisher versionhttp://ieeexplore.ieee.org/xpl/articleDetails.jsp?arnumber=7354260
Collections
Share: