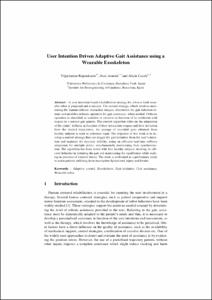 A user intention based rehabilitation strategy for a lower-limb wearable robot is proposed and evaluated. The control strategy, which involves monitoring the human-orthosis interaction torques, determines the gait initiation instant and modifies orthosis operation for gait assistance, when needed. Orthosis operation is classified as assistive or resistive in function of its evolution with respect to a normal gait pattern. The control algorithm relies on the adaptation of the joints’ stiffness in function of their interaction torques and their deviation from the desired trajectories. An average of recorded gaits obtained from healthy subjects is used as reference input. The objective of this work is to develop a control strategy that can trigger the gait initiation from the user’s intention and maintain the dynamic stability, using an efficient real-time stiffness adaptation for multiple joints, simultaneously maintaining their synchronization. The algorithm has been tested with five healthy subjects showing its efficient behavior in initiating the gait and maintaining the equilibrium while walking in presence of external forces. The work is performed as a preliminary study to assist patients suffering from incomplete Spinal cord injury and Stroke.
CitationRajasekaran, V., Aranda, J., Casals, A. User intention driven adaptive gait assistance using a wearable exoskeleton. "Advances in Intelligent Systems and Computing", 2016, vol. 418, p. 289-301.
URIhttp://hdl.handle.net/2117/83935
DOI10.1007/978-3-319-27149-1_23
ISSN2194-5357
Publisher versionhttp://link.springer.com/chapter/10.1007%2F978-3-319-27149-1_23