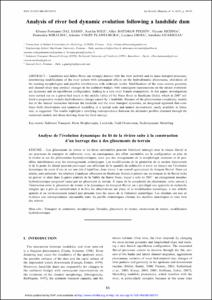 Landslides and debris flows can strongly interact with the river network and its mass transport processes, determining modifications of the river pattern with consequent effects on the hydrodynamic phenomena, alterations of the existing morphologies and possible interferences with anthropic works. Modifications of the cross section geometry and channel slope may produce changes in the sediment budget, with consequent repercussions on the stream evolutionary dynamics and its equilibrium configuration, leading to a new river branch arrangement. In this paper, investigations were carried out on a gravel-bed reach in the middle valley of the Noce River in Basilicata (Italy), which in 2007 suffered a progressive morpho-hydrodynamic change caused by a landslide. Because of the phenomenon complexity, mainly due to the mutual interaction between the landslide and the river transport dynamics, an integrated approach that combines field observations and numerical modelling in a spatial scale and natural environment, rarely available in literature, is suggested. The results highlight a satisfying correspondence between the altimetric profiles obtained through the numerical models and those deriving from the field surveys.
CitationDel Sasso, S.F, Sole, A., Bateman, A., De Medina, V., Mirauda, D., Volpe, A., Giosa, L., Guariglia, A. Analysis of river bed dynamic evolution following a landslide dam. "Houille blanche-revue internationale de l eau", Desembre 2015, núm. 6, p. 88-95.
URIhttp://hdl.handle.net/2117/83907
DOI10.1051/lhb/20150073
ISSN0018-6368
Publisher versionhttp://www.shf-lhb.org/articles/lhb/abs/2015/06/lhb20150073/lhb20150073.html