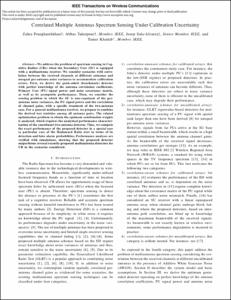 Khattab, Tamer
Document typeArticle
Rights accessOpen Access
Abstract
We address the problem of spectrum sensing in cognitive radios (CRs) when the secondary user (SU) is equipped with a multiantenna receiver. We consider scenarios with correlation between the received channels at different antennas and unequal per-antenna noise variances to accommodate calibration errors. First, we derive the exact as well as the asymptotic performance of the genie-aided (benchmark) detector with perfect knowledge of the antenna correlation coefficients, the primary user (PU) signal power and the noise covariance matrix. Then, we consider the sensing problem in which the SU is non-cognizant of the per-antenna noise variances, the PU signal power and the correlation of channel gains, starting with a specific treatment of the two-antenna case. For a general multiantenna receiver, we propose combining the derived test statistics among all antenna pairs. The related optimization problem to obtain the optimum combination weights is analyzed, which requires the analytical performance characterization of the constituent two-antenna detector. Thus, we compute the exact performance of the proposed detector in a special case (a particular case of the Hadamard ratio test) in terms of its detection and false alarm probabilities. Performance analyses are verified with simulations, showing that the proposed detector outperforms several recently-proposed multiantenna detectors for CR in the scenarios considered.
CitationPourgharehkhan, Z., Taherpour, A., Sala, J., Khattab, T. Correlated multiple antennas spectrum sensing under calibration uncertainty. "IEEE transactions on wireless communications", 01 Desembre 2015, vol. 14, núm. 12, p. 6777-6791.
URIhttp://hdl.handle.net/2117/83853
DOI10.1109/TWC.2015.2459706
ISSN1536-1276
Publisher versionhttp://ieeexplore.ieee.org/stamp/stamp.jsp?arnumber=7164326
Collections
Share: