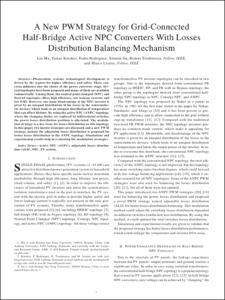 Photovoltaic systems technological development is driven by the request for higher efficiency and safety. These concerns influence also the choice of the power converter stage. Several topologies have been proposed and many of them are available commercially. Among them, the neutral point clamped (NPC) and derived topologies offers high efficiency, low leakage current, and low EMI. However, one main disadvantage of the NPC inverter is given by an unequal distribution of the losses in the semiconductor devices, which leads to an unequal distribution of temperature that can affect lifetime. By using the active NPC (ANPC) topology, where the clamping diodes are replaced by bidirectional switches, the power losses distribution problem is alleviated. The modulation strategy is a key issue for losses distribution in this topology. In this paper, two known strategies are discussed and a new PWM strategy, namely the adjustable losses distribution is proposed for better losses distribution in the ANPC topology. Simulations and experimental results help in evaluating the modulation strategies
CitationMa, L., Kerekes, T., Rodriguez, P., Jin, X., Teodorescu, R., Liserre, M. A new PWM strategy for grid-connected half-bridge active NPC converters with losses distribution balancing mechanism. "IEEE transactions on power electronics", 09 Gener 2015, vol. 30, núm. 9, p. 5331-5340.
URIhttp://hdl.handle.net/2117/83812
DOI10.1109/TPEL.2014.2387152
ISSN0885-8993
Publisher versionhttp://ieeexplore.ieee.org/stamp/stamp.jsp?tp=&arnumber=7005486