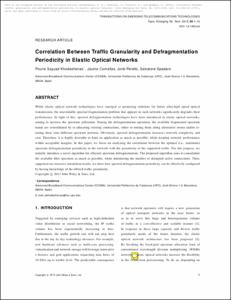 Except where otherwise noted, content on this work is licensed under a Creative Commons license : Attribution-NonCommercial-NoDerivs 3.0 Spain
ProjectENHANCED OPTICAL NETWORKS FEATURING ADAPTABLE AND HIGHLY SCALABLE MULTI-GRANULAR TRANSPORT SERVICES (MICINN-TEC2011-27310)
Abstract
While elastic optical network technologies have emerged as promising solutions for future ultra-high-speed optical transmission, the unavoidable spectral fragmentation problem that appears in such networks significantly degrades their performance. In light of this, spectral defragmentation technologies have been introduced in elastic optical networks, aiming to increase the spectrum utilisation. During the defragmentation operation, the available fragmented spectrum bands are consolidated by reallocating existing connections, either re-routing them along alternative routes and/or re-tuning them onto different spectrum portions. Obviously, spectral defragmentation increases network complexity and cost. Therefore, it is highly desirable to limit its application as much as possible, while keeping network performance within acceptable margins. In this paper, we focus on analyzing the correlation between the optimal (i.e. minimum) spectrum defragmentation periodicity in the network with the granularity of the supported traffic. For this purpose, we initially introduce a novel algorithm for efficient spectrum defragmentation. The proposed algorithm aims to consolidate the available fibre spectrum as much as possible, while limiting the number of reallocated active connections. Then, supported on extensive simulation results, we show how spectral defragmentation periodicity can be effectively configured by having knowledge of the offered traffic granularity.
CitationSayyad, P., Comellas, J., Perello, J., Spadaro, S. Correlation between traffic granularity and defragmentation periodicity in elastic optical networks. "Transactions on emerging telecommunications technologies", 01 Juliol 2015, vol. 26, núm. 7, p. 1011-1018.
URIhttp://hdl.handle.net/2117/83738
DOI10.1002/ett.2795
ISSN2161-3915
Publisher versionhttp://onlinelibrary.wiley.com/doi/10.1002/ett.2795/abstract
Collections
Share: