Design, implementation and evaluation of ParaDict, a data parallel library for dictionaries 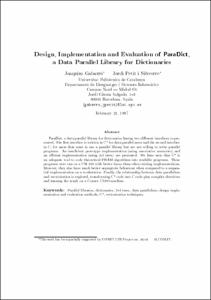 Document typeExternal research report
Rights accessOpen Access
Abstract
ParaDict, a data parallel library for dictionaries having two different interfaces, is presented. The first interface is written in C* for data parallel users and the second interface in C, for users that want to use a parallel library but not to write parallel programs. We have seen that C* is an adequate tool to code theoretical PRAM algorithms into readable programs. These programs were ran on a CM 200 with better times than other existing implementations. They also have much better asymptotic behaviour when compared to a sequential implementation on a workstation. Finally, the relationship between data parallelism and vectorization is explored, transforming C* code into C code plus compiler directives and running the result on a Convex C3480 machine.
CitationGabarro, J., Petit, J. "Design, implementation and evaluation of ParaDict, a data parallel library for dictionaries". 1997.
Is part ofLSI-97-13-R
URIhttp://hdl.handle.net/2117/83705
Collections
Share: