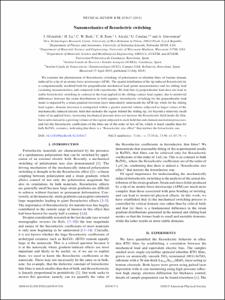 Document typeArticle
Rights accessOpen Access
European Commission's projectFLEXOELECTRICITY - Flexoelectricity (EC-FP7-308023)
Abstract
We examine the phenomenon of flexoelectric switching of polarization in ultrathin films of barium titanate induced by a tip of an atomic force microscope (AFM). The spatial distribution of the tip-induced flexoelectricity is computationally modeled both for perpendicular mechanical load (point measurements) and for sliding load (scanning measurements), and compared with experiments. We find that (i) perpendicular load does not lead to stable ferroelectric switching in contrast to the load applied in the sliding contact load regime, due to nontrivial differences between the strain distributions in both regimes: ferroelectric switching for the perpendicular load mode is impaired by a strain gradient inversion layer immediately underneath the AFM tip; while for the sliding load regime, domain inversion is unimpaired within a greater material volume subjected to larger values of the mechanically induced electric field that includes the region behind the sliding tip; (ii) beyond a relatively small value of an applied force, increasing mechanical pressure does not increase the flexoelectric field inside the film, but results instead in a growing volume of the region subjected to such field that aids domain nucleation processes; and (iii) the flexoelectric coefficients of the films are of the order of few nC/m, which is much smaller than for bulk BaTiO3 ceramics, indicating that there is a “flexoelectric size effect” that mirrors the ferroelectric one
CitationAlcala, J. Nanomechanics of flexoelectric switching. "Physical Review B - Condensed Matter and Materials Physics", 2015, vol. 92, núm. 3, p. 035417-1-035417-9.
URIhttp://hdl.handle.net/2117/83691
DOI10.1103/PhysRevB.92.035417
ISSN1550-235X
Publisher versionhttp://journals.aps.org/prb/abstract/10.1103/PhysRevB.92.035417
Collections
Share: