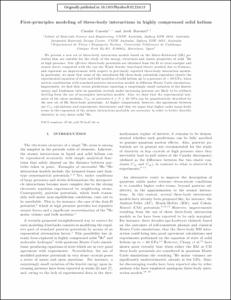 Document typeArticle
Rights accessOpen Access
Abstract
We present a set of three-body interaction models based on the Slater-Kirkwood (SK) potential that are suitable for the study of the energy, structural, and elastic properties of solid He4 at high pressure. Our effective three-body potentials are obtained from the fit to total energies and atomic forces computed with the van der Waals density functional theory method due to Grimme, and represent an improvement with respect to previously reported three-body interaction models. In particular, we show that some of the introduced SK three-body potentials reproduce closely the experimental equation of state and bulk modulus of solid helium up to a pressure of ~60 GPa, when used in combination with standard pairwise interaction models in diffusion Monte Carlo simulations. Importantly, we find that recent predictions reporting a surprisingly small variation of the kinetic energy and Lindeman ratio on quantum crystals under increasing pressure are likely to be artifacts deriving from the use of incomplete interaction models. Also, we show that the experimental variation of the shear modulus, C44, at pressures 0=P=25 GPa can be quantitatively described by our set of SK three-body potentials. At higher compression, however, the agreement between our C44 calculations and experiments deteriorates and thus we argue that higher order many-body terms in the expansion of the atomic interactions probably are necessary in order to better describe elasticity in very dense solid He4.
CitationCazorla, C., Boronat, J. First-principles modeling of three-body interactions in highly compressed solid helium. "Physical Review B - Condensed Matter and Materials Physics", 31 Desembre 2015, vol. 92.
URIhttp://hdl.handle.net/2117/83684
DOI10.1103/PhysRevB.92.224113
ISSN1550-235X
Collections
Share: