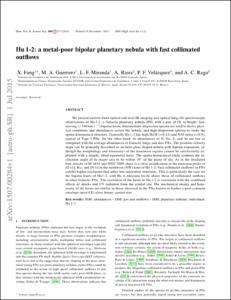 Velázquez, P.F.
Raga, A.C.
Document typeArticle
Rights accessOpen Access
Abstract
© 2015 The Authors. Published by Oxford University Press on behalf of the Royal Astronomical Society. We present narrow-band optical and near-IR imaging and optical long-slit spectroscopic observations of Hu 1-2, a Galactic planetary nebula (PN) with a pair of [NII]-bright, fast-moving (>340 km s-1) bipolar knots. Intermediate-dispersion spectra are used to derive physical conditions and abundances across the nebula, and high-dispersion spectra to study the spatiokinematical structure. Generally, Hu 1-2 has high He/H (˜0.14) and N/O ratios (˜0.9), typical of Type I PNe. On the other hand, its abundances of O, Ne, S, and Ar are low as compared with the average abundances of Galactic bulge and disc PNe. The position-velocity maps can be generally described as an hour-glass shaped nebula with bipolar expansion, although the morphology and kinematics of the innermost regions cannot be satisfactorily explained with a simple, tilted equatorial torus. The spatio-kinematical study confines the inclination angle of its major axis to be within 10° of the plane of sky. As in the irradiated bow-shocks of IC 4634 and NGC 7009, there is a clear stratification in the emission peaks of [O III], Ha, and [N II] in the north-west (NW) knot of Hu 1-2. Fast collimated outflows in PNe exhibit higher excitation than other low-ionization structures. This is particularly the case for the bipolar knots of Hu 1-2, with He II emission levels above those of collimated outflows in other Galactic PNe. The excitation of the knots in Hu 1-2 is consistent with the combined effects of shocks and UV radiation from the central star. The mechanical energy and luminosity of the knots are similar to those observed in the PNe known to harbour a post-common envelope (post-CE) close binary central star.
CitationFang, X., Guerrero, M., Miranda, L., Riera, A., Velázquez, P., Raga, A. Hu 1-2: A metal-poor bipolar planetary nebula with fast collimated outflows. "Monthly notices of the Royal Astronomical Society", 27 Octubre 2015, vol. 452, núm. 3, p. 2445-2462.
URIhttp://hdl.handle.net/2117/83669
DOI10.1093/mnras/stv1477
ISSN0035-8711
Collections
Share: