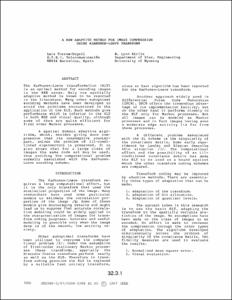 Document typeConference report
PublisherInstitute of Electrical and Electronics Engineers (IEEE)
Rights accessOpen Access
Abstract
The Karhunen-Loeve transformation (KLT) is an optimal method for encoding images in the MSE sense. Only one spatially adaptive method is known to be reported in the literature. Many other suboptimal encoding methods have been developed to avoid the problems encountered in the application of the KLT. Such methods give performance which is inferior to the KLT in both MSE and visual quality, although some of them are quite efficient for first order Markov processes. A spatial domain adaptive algorithm, which, besides giving more compression than its nonadaptive counterpart, solves the problem of ill-conditioned eigenvectors is presented. It is also shown that for a large class of images the same code set may be used, thus avoiding the computational problem normally associated with the Karhunen-Loeve encoding scheme.
CitationTorres, L. A new adaptive method for image compression using Karhunen-Loeve transform. A: IEEE International Conference on Acoustics, Speech, and Signal Processing. "ICASSP 87: 1987 international conference on acoustics, speech, and signal processing, April 6 to 9, 1987, Dallas, TX: proceedings". Dallas, Texas: Institute of Electrical and Electronics Engineers (IEEE), 1987, p. 1366-1369.
URIhttp://hdl.handle.net/2117/83627
DOI10.1109/ICASSP.1987.1169463
Publisher versionhttp://ieeexplore.ieee.org/stamp/stamp.jsp?tp=&arnumber=1169463
Collections
Share: