Classification of potato cultivars to establish their processing aptitude 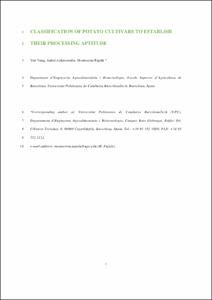 Except where otherwise noted, content on this work is licensed under a Creative Commons license : Attribution-NonCommercial-NoDerivs 3.0 Spain
Abstract
BACKGROUNDThe commercial potato cultivars are diverse not only in their physical characteristics but also in their nutritional compositions and their content of functional compounds (resistant starch, total phenolic content and antioxidant activity), but there is little information about these differences. The aim of this study was to characterise the nutritional value (focusing on carbohydrates and functional compounds) and instrumental parameters of eight potato cultivars consumed in Spain and to determine whether these parameters are useful for classifying the cultivars.; RESULTSSignificant Pearson's correlations were found due to the common and complex interactions between the constituents of potatoes and their properties (P < 0.05). Principal component analysis revealed the correlations among the physicochemical properties, and the first two principal components explained 56.84% of the variance among the cultivars studied.; CONCLUSIONThe eight cultivars could be classified into three groups: (1) Red Pontiac, Caesar, Kennebec, Agria and Cherie cultivars, (2) Agata and Monalisa cultivars and (3) Spirit cultivar. The results demonstrated that certain nutritional and functional parameters indicated the potential efficacy of different cultivars to satisfy the nutritional needs of consumers, improving the knowledge on the biochemical basis of potato processing to obtain higher-quality products. (c) 2015 Society of Chemical Industry
CitationYang, Y., Achaerandio, I., Pujola, M. Classification of potato cultivars to establish their processing aptitude. "Journal of the science of food and agriculture", 30 Gener 2016, vol. 96, núm. 2, p. 413-421.
URIhttp://hdl.handle.net/2117/83613
DOI10.1002/jsfa.7104
ISSN0022-5142
Collections
Share: