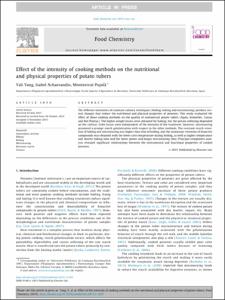 The different intensities of common culinary techniques (boiling, baking and microwaving) produce several changes that reduce the nutritional and physical properties of potatoes. This study evaluated the effect of those cooking methods on the quality of commercial potato tubers (Agata, Kennebec, Caesar and Red Pontiac). The higher weight losses were obtained for baking, but the potato softening depended on the cultivar. Color losses were independent of the intensity of the treatment; however, microwaving promoted a prompt starch gelatinization with respect to the other methods. The resistant starch retention of baking and microwaving was higher than that of boiling, and the maximum retention of bioactive compounds was obtained with the lower core temperature during boiling, as well as higher temperature and shorter baking time and the lower power and longer microwaving time. Principal component analysis revealed significant relationships between the instrumental and functional properties of cooked potatoes. (C) 2015 Published by Elsevier Ltd.
CitationYang, Y., Achaerandio, I., Pujola, M. Effect of the intensity of cooking methods on the nutritional and physical properties of potato tubers. "Food chemistry", 15 Abril 2016, vol. 197, p. 1301-1310.
URIhttp://hdl.handle.net/2117/83607
DOI10.1016/j.foodchem.2015.11.028
ISSN0308-8146