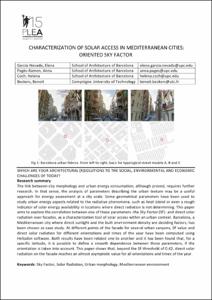 The link between city morphology and urban energy consumption, although proved, requires further research. In that sense, the analysis of parameters describing the urban texture may be a useful approach for energy assessment at a city scale. Some geometrical parameters have been used to study urban energy aspects related to the radiative phenomena, such as heat island or even a rough indicator of solar energy availability in locations where direct radiation is not determining. This paper aims to explore the correlation between one of these parameters -the Sky Factor (SF)- and direct solar radiation over facades, as a characterization tool of solar access within an urban context. Barcelona, a Mediterranean city where direct sunlight and the built environment density are deciding factors, has been chosen as case study. At different points of the facade for several urban canyons, SF value and direct solar radiation for different orientations and times of the year have been computed using Heliodon software. Both results have been related one to another and it has been found that, for a specific latitude, it is possible to define a smooth dependence between these parameters, if the orientation is taken into account. This paper shows that, beyond the SF threshold of 0.42, direct solar radiation on the facade reaches an almost asymptotic value for all orientations and times of the year.
CitationGarcia-Nevado, E., Pages-Ramon, A., Coch, H., Beckers, B. Characterization of solar access in mediterranean cities: oriented sky factor. A: International Conference on Passive and Low Energy Architecture. "PLEA 2015: Architecture in (R)Evolution – 31st International PLEA Conference – Bologna 9-11 September: full papers". Bolonia: Building Green Futures, 2015, p. 1-7.
URIhttp://hdl.handle.net/2117/83576
ISBN978-88-941163-1-1