Oscillations and uniaxial mechanochemical waves in a model of an active poroelastic medium: application to deformation patterns in protoplasmic droplets of Physarum polycephalum 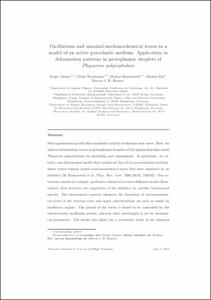 Self-organization in cells often manifests itself in oscillations and waves. Here, we address deformation waves in protoplasmic droplets of the plasmodial slime mould Physarum polycephalum by modelling and experiments. In particular, we extend a one-dimensional model that considered the cell as a poroelastic medium, where active tension caused mechanochemical waves that were regulated by an inhibitor (Radszuweit et al., 2013). Our extension consists of a simple, qualitative chemical reaction–diffusion model (Brusselator) that describes the regulation of the inhibitor by another biochemical species. The biochemical reaction enhances the formation of mechanochemical waves if the reaction rates and input concentrations are near or inside an oscillatory regime. The period of the waves is found to be controlled by the characteristic oscillation period, whereas their wavelength is set by mechanical parameters. The model also allows for a systematic study of the chemical activity at the onset of mechanochemical waves. We also present examples for pattern formation in protoplasmic droplets of Physarum polycephalum including global oscillations where the central region of the droplets is in antiphase to the boundary zone, as well as travelling and standing wave-like uniaxial patterns. Finally, we apply our model to reproduce these experimental results by identifying the active tension inhibitor with the intracellular calcium concentration in the Physarum droplets and by using parameter values from mechanical experiments, respectively knowledge about the properties of calcium oscillations in Physarum. The simulation results are then found to be in good agreement with the experimental observations.
CitationAlonso, S., Strachauer, U., Radszuweit, M., Bär, M., Hauser, M. Oscillations and uniaxial mechanochemical waves in a model of an active poroelastic medium: application to deformation patterns in protoplasmic droplets of Physarum polycephalum. "Physica. D, Nonlinear phenomena", 01 Abril 2016, vol. 318-319, p. 58-69.
URIhttp://hdl.handle.net/2117/83565
DOI10.1016/j.physd.2015.09.017
ISSN0167-2789