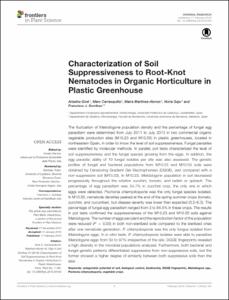 The fluctuation of Meloidogyne population density and the percentage of fungal egg parasitism were determined from July 2011 to July 2013 in two commercial organic vegetable production sites (M10.23 and M10.55) in plastic greenhouses, located in northeastern Spain, in order to know the level of soil suppressiveness. Fungal parasites were identified by molecular methods. In parallel, pot tests characterized the level of soil suppressiveness and the fungal species growing from the eggs. In addition, the egg parasitic ability of 10 fungal isolates per site was also assessed. The genetic profiles of fungal and bacterial populations from M10.23 and M10.55 soils were obtained by Denaturing Gradient Gel Electrophoresis (DGGE), and compared with a non-suppressive soil (M10.33). In M10.23, Meloidogyne population in soil decreased progressively throughout the rotation zucchini, tomato, and radish or spinach. The percentage of egg parasitism was 54.7% in zucchini crop, the only one in which eggs were detected. Pochonia chlamydosporia was the only fungal species isolated. In M10.55, nematode densities peaked at the end of the spring-summer crops (tomato, zucchini, and cucumber), but disease severity was lower than expected (0.2–6.3). The percentage of fungal egg parasitism ranged from 3 to 84.5% in these crops. The results in pot tests confirmed the suppressiveness of the M10.23 and M10.55 soils against Meloidogyne. The number of eggs per plant and the reproduction factor of the population were reduced (P < 0.05) in both non-sterilized soils compared to the sterilized ones after one nematode generation. P. chlamydosporia was the only fungus isolated from Meloidogyne eggs. In in vitro tests, P. chlamydosporia isolates were able to parasitize Meloidogyne eggs from 50 to 97% irrespective of the site. DGGE fingerprints revealed a high diversity in the microbial populations analyzed. Furthermore, both bacterial and fungal genetic patterns differentiated suppressive from non-suppressive soils, but the former showed a higher degree of similarity between both suppressive soils than the later.
CitationGiné, A., Carrasquilla, M., Martínez-Alonso, M., Gaju-Ricart, N., Sorribas, F. Characterization of soil suppressiveness to root-knot nematodes in organic horticulture in plastic greenhouse. "Frontiers in Plant Science", 01 Febrer 2016, vol. 15, núm. 17.
URIhttp://hdl.handle.net/2117/83546
DOI10.3389/fpls.2016.00164
ISSN1664-462X
Publisher versionhttp://journal.frontiersin.org/article/10.3389/fpls.2016.00164/full