Evaluating the impacts of urban regeneration companies in Portugal : the case of Porto 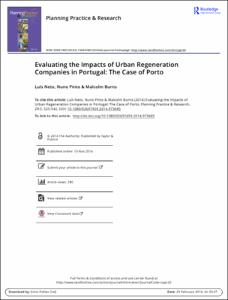 Evaluating the Impacts of Urban Regeneration Companies in Portugal The Case of Porto.pdf (843,9Kb)
Share:

Document typeArticle
Rights accessOpen Access
All rights reserved. This work is protected by the corresponding intellectual and industrial property rights. Without prejudice to any existing legal exemptions, reproduction, distribution, public communication or transformation of this work are prohibited without permission of the copyright holder
Abstract
Cities have undergone many changes since the 1950s, not least the expansion of urban areas to the detriment of the historic central areas, some of which have been left to decay. In Portugal the most visible results of this phenomenon are found in the metropolitan areas of Lisbon and Porto. To address this problem, the Portuguese Government conceived the first legal instrument for urban regeneration in 2004 which allows the local administrations to form publicly owned companies—urban regeneration companies (SRUs) to actively endorse urban regeneration in historic city centres. This paper discusses the activities of the Porto Vivo SRU, one of these companies created in Porto, in the context of the Portuguese milieu of urban regeneration and evaluates Porto Vivo's operation.
CitationNeto, L., Norte, N., Burns, M. Evaluating the impacts of urban regeneration companies in Portugal : the case of Porto. "Planning practice + research", 10 Novembre 2014, vol. 29, núm. 5, p. 525-542.
URIhttp://hdl.handle.net/2117/83541
DOI10.1080/02697459.2014.973685
ISSN0269-7459
Publisher versionhttp://www.tandfonline.com/doi/abs/10.1080/02697459.2014.973685?tab=permissions&
Collections
Share: