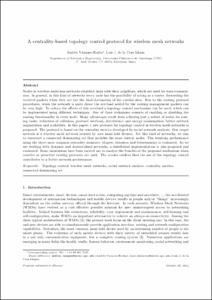 Document typeArticle
PublisherElsevier
Rights accessOpen Access
All rights reserved. This work is protected by the corresponding intellectual and industrial property rights. Without prejudice to any existing legal exemptions, reproduction, distribution, public communication or transformation of this work are prohibited without permission of the copyright holder
Abstract
Nodes in wireless multi-hop networks establish links with their neighbors, which are used for data transmission. In general, in this kind of networks every node has the possibility of acting as a router, forwarding the received packets when they are not the final destination of the carried data. Due to the routing protocol procedures, when the network is quite dense the overload added by the routing management messages can be very high. To reduce the effects of this overload a topology control mechanism can be used, which can be implemented using different techniques. One of these techniques consists of enabling or disabling the routing functionality in every node. Many advantages result from selecting just a subset of nodes for routing tasks: reduction of collisions, protocol overhead, interference and energy consumption, better network organization and scalability. In this paper, a new protocol for topology control in wireless mesh networks is proposed. The protocol is based on the centrality metrics developed by social network analysts. Our target network is a wireless mesh network created by user hand-held devices. For this kind of networks, we aim to construct a connected dominating set that includes the most central nodes. The resulting performance using the three most common centrality measures (degree, closeness and betweenness) is evaluated. As we are working with dynamic and decentralized networks, a distributed implementation is also proposed and evaluated. Some simulations have been carried out to analyze the benefits of the proposed mechanism when reactive or proactive routing protocols are used. The results confirm that the use of the topology control contributes to a better network performance.
CitationVázquez Rodas, A., de la Cruz Llopis, Luis J. A centrality-based topology control protocol for wireless mesh networks. "Ad hoc networks", 01 Gener 2015, vol. 24, p. 34-54.
URIhttp://hdl.handle.net/2117/83491
DOI10.1016/j.adhoc.2014.07.026
ISSN1570-8705
Publisher versionhttp://www.sciencedirect.com/science/article/pii/S1570870514001577
Collections
Share: