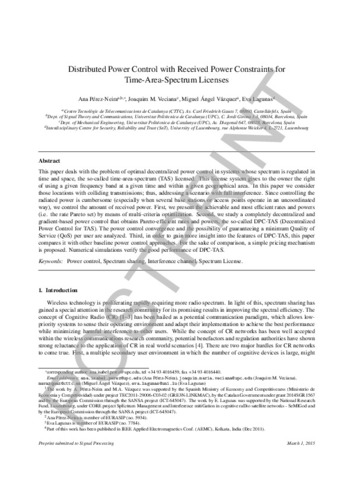 Vázquez, Miguel Ángel
Lagunas, Eva
Document typeArticle
Rights accessOpen Access
All rights reserved. This work is protected by the corresponding intellectual and industrial property rights. Without prejudice to any existing legal exemptions, reproduction, distribution, public communication or transformation of this work are prohibited without permission of the copyright holder
ProjectSANSA - Shared Access Terrestrial-Satellite Backhaul Network enabled by Smart Antennas (EC-H2020-645047)
Abstract
This paper deals with the problem of optimal decentralized power control in systems whose spectrum is regulated in time and space, the so-called time-area-spectrum (TAS) licensed. This license system gives to the owner the right of using a given frequency band at a given time and within a given geographical area. In this paper we consider those locations with colliding transmissions; thus, addressing a scenario with full interference. In order to facilitate the coexistance of different TAS licenses, the power spectral density of the used band shall be limited. Since controlling the overall radiated power in a given area is cumbersome (especially when several base stations or access points operate in an uncoordinated way), we control the amount of received power. First, we present the achievable rates (i.e. the rate Pareto set) and their corresponding powers by means of multi-criteria optimization theory. Second, we study a completely decentralized and gradient-based power control that obtains Pareto-efficient rates and powers, the so-called DPC-TAS (Decentralized Power Control for TAS). The power control convergence and the possibility of guaranteeing a minimum Quality of Service (QoS) per user are analyzed. Third, in order to gain more insight into the features of DPC-TAS, this paper compares it with other baseline power control approaches. For the sake of comparison, a simple pricing mechanism is proposed. Numerical simulations verify the good performance of DPC-TAS.
CitationPerez, A., Veciana, J., Vázquez, M., Lagunas, E. Distributed power control with received power constraints for time-area-spectrum licenses. "Signal processing", Març 2016, vol. 120, p. 141-155.
URIhttp://hdl.handle.net/2117/83482
DOI10.1016/j.sigpro.2015.09.009
ISSN0165-1684
Publisher versionhttp://www.sciencedirect.com/science/article/pii/S0165168415003114
Collections
Share: