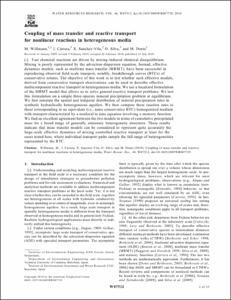 Fast chemical reactions are driven by mixing‐induced chemical disequilibrium. Mixing is poorly represented by the advection‐dispersion equation. Instead, effective dynamics models, such as multirate mass transfer (MRMT), have been successful in reproducing observed field‐scale transport, notably, breakthrough curves (BTCs) of conservative solutes. The objective of this work is to test whether such effective models, derived from conservative transport observations, can be used to describe effective multicomponent reactive transport in heterogeneous media. We use a localized formulation of the MRMT model that allows us to solve general reactive transport problems. We test this formulation on a simple three‐species mineral precipitation problem at equilibrium. We first simulate the spatial and temporal distribution of mineral precipitation rates in synthetic hydraulically heterogeneous aquifers. We then compare these reaction rates to those corresponding to an equivalent (i.e., same conservative BTC) homogenized medium with transport characterized by a nonlocal in time equation involving a memory function. We find an excellent agreement between the two models in terms of cumulative precipitated mass for a broad range of generally stationary heterogeneity structures. These results indicate that mass transfer models can be considered to represent quite accurately the large‐scale effective dynamics of mixing controlled reactive transport at least for the cases tested here, where individual transport paths sample the full range of heterogeneities represented by the BTC.
CitationWillmann, M. [et al.]. Coupling of mass transfer and reactive transport for nonlinear reactions in heterogeneous media. "Water resources research", 01 Juliol 2010, vol. 46, núm. W07512, p. 1-15.
URIhttp://hdl.handle.net/2117/8347
DOI10.1029/2009WR007739, 2010
ISSN0043-1397